Since the satellite Suomi NPP was launched in 2011, its VIIRS sensors have been providing night-lights data at a resolution of about four pixels per km². While individual photographs taken from space have a higher resolution and differences in colour (like this one showing Berlin's still-divided street lighting), having imagery at the mentioned resolution for the whole globe was unprecedented.

Using combined data from many satellite pictures taken in April and October 2012, NASA published a beautified map in which the night lights were shown in yellow on a blue-ified version of the day-time Blue Marble picture. It shows even faint lights rather brightly and is thus well suited to spot even villages.

Recently, the Earth Observation Group at NGDC, which also provided the data underlying the above-mentioned NASA picture, has published grey-scale maps of night lights. Compared with the 2012 image, there are also a few blurred areas, probably due to cloud cover during the periods the data was captured. Most importantly, though, the map linked below better shows differences in brightness within big cities (e.g. industrial vs. residential areas), at the cost of making villages' dim lights hardly visible.

On 10 Feb 2006, the US National Geophysical Data Center published night-lights pictures like the following for all years from 1992 through 2003, at a resolution of 1 pixel per km²:

The data can be downloaded here, but the files are about 300 MB each despite compression   this is because they contain other versions of the pictures that are not limited to permanent lights, but also include forest fires etc.

Interesting features to look for are the bright Nile valley, the contrast between North and South Korea, light shifts in Eastern Europe between 1992 and 2002 and newly lit roads in Dubai. (The 2002 version has been chosen because that of 2003 appears dimmed across the globe, probably for technical reasons.)

Please note that, as can be seen in the 'raw' images, NGDC only provided data between 65°N and 65°S, the (very few) lights near the poles have thus been extracted from this earlier publication. The blue background is an abridged version of NASA's 4-gigapixel Blue Marble picture. Higher resolutions of the above pictures as well as Blue Marble can be browsed here on blue-marble.de, but also requested by e-mail.

A colour-coded comparison of brightness can be downloaded as well, again in 58 megapixels – increases from 1992 to 2002 are shown in green, decreases in red:

Cities or gas flares that had been registered at the brightness scale's maximum, anyway, naturally show no change and thus appear black on the high-res version. A similar picture for India, using three colours to also compare brighness levels for 1992, 1998 and 2003, is available here from NGDC.

The Earth Observation Group offers posters that shows the various origins of light and comment on them:

The sixth permanent crew of the International Space Station, present 2002/03, took over 4000 night-time images of cities using a standard digital camera with a self-made tracking system that extenuated the blurring effect of the station's movement around Earth, yielding a resolution of up to 60m per pixel as opposed to 1000m with the DMSP data. NGDC hosts a 720×480-pixel video created from a selection of these pictures. The still excerpts below (not equally scaled) demonstrate the detail at the examples of Abu Dhabi (left), the capital of the United Arab Emirates, and the U.S. capital, Washington, DC (right). The latter shows that sharp differences in lighting (as at the border between the two Koreas) can also occur at a sub-national level, as the diamond-shaped outline of the federal district is visible rather well: 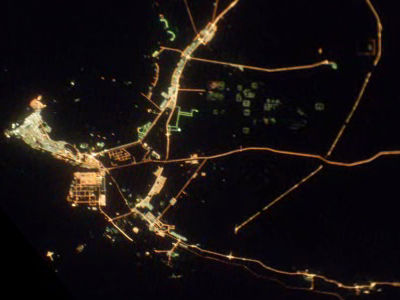 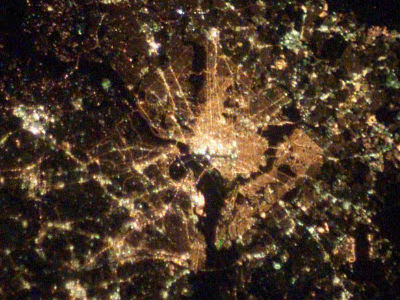